Andrew G Hill
Hello, I am a writer and I also do supply work in schools. I have worked with children for over 30 years. I was a children/schools worker for the London City Mission and created many short stories as part of RE lessons and for holiday clubs. I'd describe myself as a kid in a adult body with a head full of stories. I love stories, reading them and making them up. I was happy to write stories as a hobby and as part of my work. With The Song of the Seraphim, my first novel, I decided to publish it and the response has encouraged me to continue the story, so I am currently writing the sequel. I am also writing a young children's picture book. The process of creating a story can be long and hard but extremely rewarding. The Song of the Seraphim was aimed at 9-14s but younger children and many adults have enjoyed it. I think that books should appeal to all ages and it's okay to read kid's books if you're an adult, so I don't like sticking an age tag on my book - if you can read it - then do so!

I’ve been placed on the data base for the Scottish Book Trust, which means I’m available for workshops, author talks and story telling. The website gives a bit more information about me the link is: www.scottishbookbtrust.com/contacts/andrew-g-hill 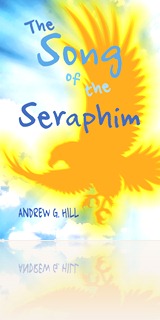 I’ve been getting some great feed back about The Song of the Seraphim; the best was from a 13 year old boy who told me that he thinks my book is brilliant! He really enjoyed it and is telling his friends about it. This is great to hear, but even better than liking my book, he told me that it has inspired him to read more books, showing me a book he had borrowed from the library to prove his determination.

As a writer, my aim is not only to entertain and make people think, but is also to create enthusiasm for stories – to inspire the reading of more books.

I'm pleased to say that Waterstone's have stocked The Song Of The Seraphim. It's available online at www.waterstones.com/waterstonesweb/products/andrew+g+hill/the+song+of+the+seraphim/6831767/

It was a strange and exciting experience to see the book on the shelf in the Waterstone's store in the Aberdeen Trinity Mall. The staff there have been giving me great support.
Posted by Andrew G Hill at 13:43 1 comment:

I've had the great privilege of visiting schools in Aberdeenshire and giving talks on creative writing. The welcome in each school (6 so far) has been fantastic. The response of the pupils to the talks with their comments and enthusiasm about writing has been inspiring - it's great to see so much interest in reading and writing.

For any pupil or teacher viewing this, I want to say a big thank you for your warm welcome and encouraging views on my book.
Posted by Andrew G Hill at 13:29 1 comment:

I enjoyed the Song of the Seraphim a lot. It is written about a boy called George who has dreams about monsters. The book is funny, interesting and action packed. It is written in a way that children can understand.
Adam aged 10
Posted by Andrew G Hill at 04:50 1 comment:

I received my first "fan mail". Here is an edited letter from a 14 year old.

I have recently finished reading your book... being a keen reader of fantasy I couldn't wait to get started.

I found the first few chapters to be slow, however, as I continued to read the reason for setting the scene became more apparent.

I thought it was a clever idea to make a giant with many heads which represented - SPOILER ALERT! - felt George's pain and misery as he was subjected to bullying and taunting.

After being kidnapped and enslaved, surrounded by depression and hopelessness I couldn't work out how George was going to escape and was delighted when -SPOILER ALERT!- Astrid's character was likeable and upbeat giving hope to George which added to the excitement.

The challenges George faced to rid himself of the giant and escape... was thrilling! Once I got into the story I couldn't put the book down and read it very quickly.

It was a fantastic read, I thoroughly enjoyed it.
I look forward to reading the sequel. I would be grateful if you would sign my book.